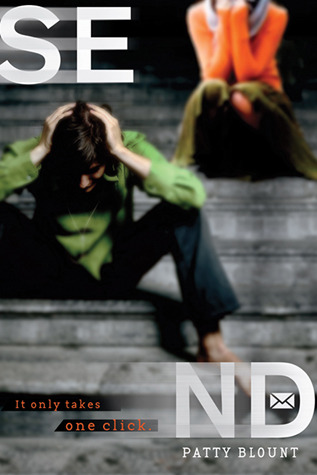 SUMMARY (from Goodreads)
It’s been five years since I clicked Send.
Four years since I got out of juvie.
Three months since I changed my name.
Two minutes since I met Julie.
A second to change my life.

All Dan wants for his senior year is to be invisible. This is his last chance at a semi-normal life. Nobody here knows who he is. Or what he’s done. But on his first day at school, instead of turning away like everyone else, Dan breaks up a fight. Because Dan knows what it’s like to be terrorized by a bully—he used to be one.

Now the whole school thinks he’s some kind of hero—except Julie. She looks at him like she knows he has a secret. Like she knows his name isn’t really Daniel...

MY THOUGHTS
There are things that I liked in Send and things that I didn’t.
I liked
1. Send by Patty Blount takes a different approach on bullying than books I’ve read previously. Rather than centers on a victim, it tells the readers about the bully himself. We see that bullying affects not only victim but also bully, as well as their families.
2. Dan. He is a great main character. When I begin to read this book I wasn’t expecting to like Dan as him being the bully. But I couldn’t help but sympathize with him. There so much guilt and pain inside him, that it difficult to watch. He can’t forget his past, he thinks he should suffer. He makes a big journey trying to forgive and learning to love.
3. Kenny. Kenny is thirteen years old Dan. Nobody, but Dan can see and hear him. Kenny lives in a room inside Dan’s head. It sounds bizarre but Patty Blount makes a great job here. Actually Kenny is my favorite character in this book. He helps understand Dan better. And I liked their banter, arguing and their tender moments.
4. Mystery element. We don’t know what exactly happened with Dan in the past. The author gives us only snippets of information. Though the mystery aspect is not mind-blowing, I guessed early in the book, it makes this book more interesting.

I didn’t like
1. Send wasn’t as emotional as I expected. I wanted it to be grittier, more heartbreaking.
2. Romance. It didn’t work for me. In my opinion there wasn’t any chemistry between Dan and Julie.

I don’t see the purpose of it. While Send deals with such a serious topic as bullying and its aftermath, this book is told in rather light tones. So such graphic description of beating was unexpected and unnecessary.
4. Secondary characters. Brandon is a guy at Dan’s new school, whom he tries to befriend. Brandon is bullied by Jeff. I think both Brandon and Jeff were underdeveloped. I also find the ending of this subplot rushed and unfinished. Also I have some issues with how Dan’s parents were portrayed. Dan is very close to his parents, he shares with them his problems, and they are understanding and loving. Actually they are unrealistically understanding. Is it possible that the guy with such a past as Dan has this kind of relationship with his parents?
Send by Patty Blount is not a perfect book, but it deals with this serious topic in a unique way. If you interested in reading a book about bullying and its consequences you should give it a try.
Posted by Ksenia at 3:19 AM